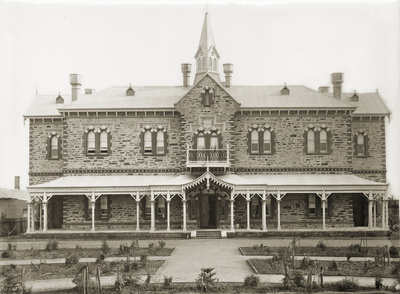 The South Australian Institute for the Deaf Dumb and Blind or Townsend House as it became known,  has had a large role to play in the LOADES Family history. A number of family members have passed through the doors of the now defunct school for the deaf. It was in this institution that another language was learnt and was passed down through the HALL family and onto the LOADES’s family members. Auslan or Australian Sign Language is the language we are talking about. Of course at the time the family members were attending and learning their first language it was not known as that.

Matilda Hibberd SCOTT entered the SA Institute for the Deaf Dumb and Blind in 1876 at the age of 5. The the time she entered the school it new building works were just being undertaken. The school had been opened for just on 2 years. A report in The Advertiser advises us that four persons had been admitted one blind and three deaf Matilda was one of those 3 students. 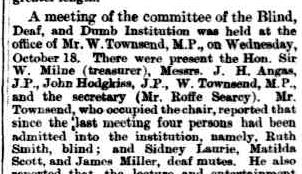 Matilda Hibberd SCOTT was born on July 6, 1872 at Rosebery now Walkerville South Australia. At the time of her birth her mother was 35 and her father was 60 and was a gardener. Matilda was the first child of their marriage although both her parents had been married previously.  Was Matilda the first person in the family to be born deaf we have no way of knowing and there is no family history or folk lore to explain the deafness.

The newspapers provide us with an insight into Matilda’s early life. She was not sent to the institution to live out her life there, but to receive training. Matilda returned to the Walkerville area and worked as a maid. During this time she was a witness in a court case as her mistress had died after receiving severe burns. Matilda’s evidence was interpreted. No name was given to the language used. 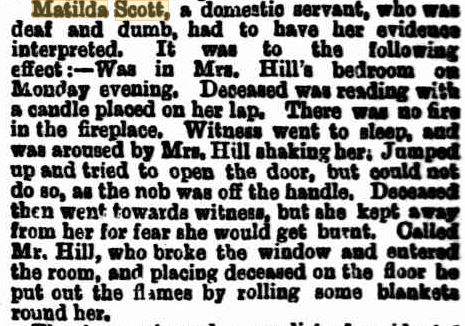 Matilda married William HALL at Saint Georges Chruch, Woodforde (now Magill) on 16th March 1891. There marriage was witnessed by Thomas HALL and Susan HALL. Matilda and William went to live at Walkerville. The birth records of the thirteen children born highlight that the family moved around country South Australia likely chasing and seeking work. None of these children were born death. but all of them learnt to sign to communicate with their mother.

This was to prove useful as two of Matilda’s grandchildren were born deaf and entered the SA Institute for Deaf, Dumb and Blind Children in the late 1930’s or Townsend House School for the Deaf, dumb and Blind as it was now called.

The use of Australian Sign Language had passed from Matilda to her children and to her grandchildren, as not only did the two deaf grandchildren use sign language, they all did. Matilda’s association with Deaf people continued all her life and using sign language was a part of that life.