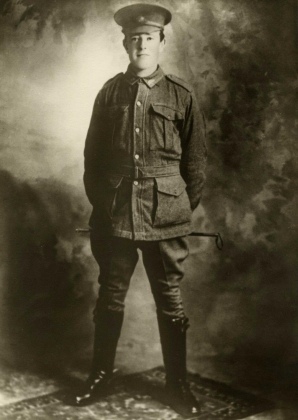 Edward Waller Loades 683A enlisted at Keswick Barracks on July 14 1915[i]. He was single, 26 years and 8 months old, 5 feet five and a quarter inches tall, a labourer with brown hair and grey eyes[ii]. Edward commonly called Ted was born 16th September 1889, the youngest of six children to Edward Waller Loades and Margaret Ann Reed[iii]. Whether Ted enlisted for patriotic reasons, to have an adventure overseas, or because of the reduction in the minimum height for soldiers in June 1915 are a matter for speculation [iv] [v]. Ted’s enlistment papers state he was single. His pay book has a four-shilling allotment to be paid to Miss Jessie Lear on embarkation, she was noted as a friend[vi] [vii]. If Jessie Lear and Ted Loades had an understanding or an engagement this did not last the duration of his service overseas. In September 1917, the allotment was transferred to his sister Ethel Jane Till, with a note added by the office staff to the record that the ‘allottee was now married’[viii] [ix].

Ted enlisted in 32nd Battalion[x] which was raised in Adelaide in August 1915[xi]. On November 11, he embarked for Egypt on the Katuna as a Driver in the Transport section of the 32nd Infantry division[xii]. The Katuna arrived in Egypt on 12 December just as the withdrawal of troops from Anzac and Suvla Bay began[xiii]. During his time in Egypt Ted had his only medical emergency of the war when he was hospitalised at the Australian General Hospital Cairo for 12 days for Conjunctivitis Pterygium[xiv]. During his time in Cairo, the ANZAC Corp was reorganised into the 1st and 2nd ANZAC Corp. Bean states the expansion of the ANZAC Corp was in response to the large influx of new recruits and for need for a nucleus of the Australian Army Corp[xv]. In April 1916 Ted transferred from the 32nd Battalion to the 48th Battalion and then to the 4th Pioneer where he remained for the remainder of the war as a driver[xvi].

The Pioneer Battalions had both and infantry and engineering role[xvii]. Westerman states that each division had a pioneer division with just over 1000 men in the division [xviii]. The roles that the Pioneer Division undertook was wide and varied and was different for each of the divisions[xix]. In an interview in May 1919 Lieutenant Colonel E. J. H. Nicholson C.M.G. D.S.O. had the following to say about the Pioneers:

“The pioneers were really engineer corps with the advantage of having skilled trained personnel to do the actual work, instead of relying on working parties who might or might not be suitable ………..The engineer was the architect, the pioneer the contractor. His work was very hard; his loses were great, but he never slacked. Big, burly, quiet spoken, self-reliant , the very pick of the finest tradesman or worker, miner, carpenter, mason, quarryman, platelayer, roadmaker.” P. 38[xx]

Nicholson provides an idolised view of the role of the Pioneer. This view is not held by Westerman who saw the infantry role being a wasted one as the pioneers were rarely used in the battlefield[xxi]. The 4th Pioneer battalion diary for 5th April 1918 states: “…. the Battalion for the first time in its history was put into support of the infantry, manning the reserve trenches in front of Laviville”[xxii].  The battalion diaries reflect the work of the Pioneers as that stated by Westerman, they worked on building and repairing communication trenches, duckwalks, roads, railways, reinforcing tunnels and improving camps sites[xxiii] [xxiv]. As a driver within the 4th Pioneers one of Ted’s roles would be to move the materials for the jobs to be undertaken and salvaging materials[xxv].

The Pioneers were often working under fire and is dangerous conditions[xxvi].  The compiled diary of Charles Lowe provides and number of instances where he as a 4th Pioneer was working under shrapnel fire[xxvii]. The battalion dairies and Charles Lowe’s dairy compiled by his family give us an idea of the conditions that Ted was facing throughout his time on the Western Front. Lowe provides a description of a march in November 1916….

’marched Mametz to Montauban Wood about 4 miles on road and inches thick with stiff mud and to run and put together huts to camp in same night. Mud nearly a foot deep everywhere but good camps and warm’[xxviii].

In January 1918, the battalion marched to Peronne to entrain to Bailleul …

’left camp and marched through heavy rain to Peronne arrived to time and got men aboard. Train arrangement bad……YMCA had hot cocoa and milk for all ranks which was a godsend after 22 hours of travelling’[xxix]

Conditions were harsh and often uncomfortable, with rain, snow and hail impacting on their work. Certainly, it was not the great adventure that many thought they would have when they sailed to the other side of the world. 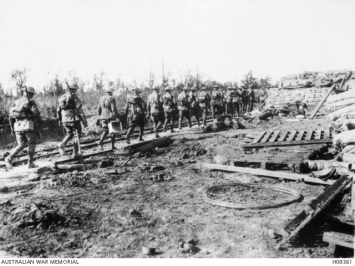 The diaries of the 4th Pioneers resonate with the place names and battles of the Western Front including Pozieres, Bullecourt, Ypres, Polygon Wood, The Somme, Villers Bretonneux, and Passchendaele[xxx]. Ted’s service records suggest that he was there for all the major battles from June 1916 when they landed in France from Cairo until August 1918 when he was on leave until mid-September[xxxi]. Three days after he returned to the field the 4th Pioneers were relieved and moved to Roseil on standby[xxxii]. The remainder of their war was taken up with training, resting, playing sports and making improvements to billets[xxxiii]. Ted was repatriated in January 1919 to Sutton Veny, England to await his return to Australia, he returned to Adelaide on the Armagh in May 1919[xxxiv].

Within three months of his return home Ted married Jessie May Hall[xxxv]. He is listed his occupation as Gentleman on his marriage certificate. By September of that year he was amongst the advertised lists of return soldiers seeking work as a horse driver[xxxvi]. In November 1919, he began work at the Abattoirs at Pooraka and worked there as a drover until his death[xxxvii].

[i] Service Record of Edward Waller Loades, p. 1, B2455, National Archives of Australia

[xxxvii] Commonwealth of Australia, Division of Adelaide. Map of Subdivision and Roll of Electors, Adelaide, A. Vaughan Government Photolithographer, 1921.