Misfortune seems to have dodged John REED for much of his life. John was born in Monkwearmouth, County Durham in July 1823 (Durham records on line). The 1841 and 1851 Census tell us that he was a brick layer and this is substantiated by his immigration records. Late in life her was either known as a stone mason or a bricklayer.

In October 1842 John REED married Mary Ann Chapman. Throughout their marriage they had nine children in total.

A large number of the children died in early infancy both in County Durham and after the family migrated to the colony of South Australia. In1854 the REED family emigrated to South Australia they came on the Dirgio that departed Liverpool in August 1854 arriving in November 1854. The family made their way to Gawler South where John worked as a bricklayer and stone mason.

It was after the death of his wife in 1867, that John’s life took a turn for the worst.

In 1869 at the Wesleyan Parsonage in Port Adelaide John married Charlotte Bonnell (SA BDM, Port Adelaide 119/398).  Charlotte was the daughter of an ex convict James Bonnell and on 27th November 1865 she had married Edward Jones SPENDER (SA Register 2nd December 1865. The record from the paper informs us of this marriage.

There are no records of this first marriage being dissolved and this was to become a bone of contention in John and Charlotte’s life. In 1886 John REED was charged with attempted murder by wife Charlotte. The newspaper report in the South Australian Register tells us that John had been in Melbourne looking for work and when he returned and attacked her wife a gun. Charlotte told the police that she had married the accused, although she had been married previously, she had not seen her first husband for 10 year and did not know if he was still alive when she married John REED. Charlotte often exaggerated the truth. While there is no evidence we can only assume that this was a bigamist marriage and that John was not happy when he realized this.John was found not guilty of the charge.

While Charlotte in her obituary stated she was the widow of John REED, it is not likely that they lived together again. In 1891 John REED committed suicide. The inquest reports states that he was in a depressed state as he was unable to find work. 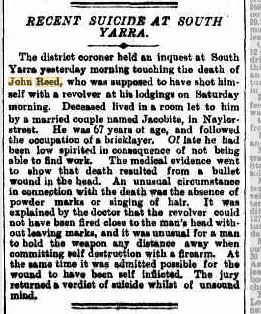 John REED had an unfortunate life, yet he had a total of 17 children with both wives. Of those 17 children, it likely that eleven of them lived to adulthood in Australia. One of them was Margaret Ann REED commonly known as Mary who married Edward Waller LOADES in 1875 and was my great grandmother.