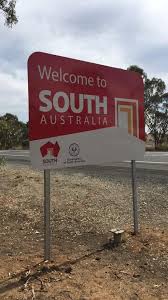 Today the unimaginable happened. The state government of South Australia has closed their borders effective from 24th March 2020. In the previous week Tasmania and the Northern Territory had already undertaken this step to slow the spread of COVID 19. No government is saying that we can prevent COVID 19, they are all working to slow the spread.

So have the borders ever been closed since the time of Federation in Australia. I thought the answer to that query would be NO. Yet a review of TROVE with state borders closed and also the non essential travel query demonstrate that we have been down this path in our past. It was talking about this to my mother that alerted me to the fact that it may have happened in the past.

She was talking about her COOPER grandparents not being able to travel to Victoria for some reason end was not sure if it was still during the war years. Instead here father Henry George COOPER had traveled to Lucindale and collected them so they could have a holiday with the family.

In 1937 there will police patrols at the border with New South Wales to slow the spread of Infantile Paralysis commonly known as polio. This was undertaken by the New South Wales government. At the same time the South Australian Government refused to close the border with Victoria at Mount Gambier and Tatiara to prevent the spread of polio. The Governments reasoning was that if they closed the border all borders would need to be closed.

During the Spanish Influenza outbreak of 1919 the Western Australian border was closed to South Australians along with the New South Wales borders being closed to Victoria and South Australia. Like today the purpose was to quarantine states and the slow the rates of infection.

Non essential travel between and within the states was in force during the second world war in Australia. This was to allow for the movement of troops around the country.

In 1949 there was another outbreak of polio and nonessential travel was cautioned against. The main goal of this was to control the spread of polio to country locations as there had been relatively few.

History shows us that one way to stop the spread of disease is to lock down the borders and pull up that drawbridge which is essentially what the Government of the day is doing. Firstly, by closing our ports and now closing our border crossing. The Premier was asked at the press conference if the border had ever been closed and was not able to answer this. Now we know.

3 thoughts on “Closing the Borders”